How did the animals survive the inbreeding as a result of Noah's Flood?

It takes around 50 individuals to prevent inbreeding. 500 to avoid eroding evolutionary potential if you believe in evolution. Doesn't this make Noah's Ark implausible because Noah only took two of each kind?

You are correct in looking at Noah's Flood from a genetic perspective as being a disaster for population fitness. Indeed, if we took two animals of each kind today, and repeated the effect of The Flood at a genetic level we would expect to see extinction events for many if not all species shortly after such a bottleneck. However, Noah wasn't dealing with animals that had the kind of mutational load that today's creatures have, he was dealing with animals that still had a near perfect set of genetic instructions from their original creation only roughly 1650 years earlier.

The effect of taking only two of each kind of animal and seven of the "clean" ones did, and still continues to, cause problems for the world today. In fact, the bible contains clear evidence of the damage that bottlenecking the human-race to only eight people did to human kind.

One way to look at population fitness is to measure the lifespan of each generation in a population. The Bible records the ages of the patriarchs in Genesis Chapters 5 and 11. If we graph these ages by generation we get the following chart: 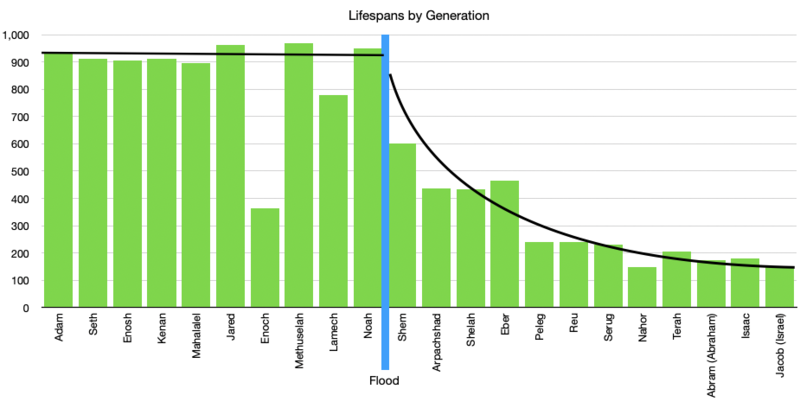 We can see from this chart that before The Flood, lifespans were reasonably stable, with a few exceptions, at about 930 years. Following the Flood there would have been significant inbreeding as you mentioned and we can see the lifespans of each subsequent generation getting shorter and shorter. This is commonly known as a biological decay curve. You can see how the decay levels off slowly at the end and if you follow the line through to us about 150 generations later, we find it consistent with the biblical data that a typical human lifespan is somewhere between 80-90 years if they live a healthy life.

We infer that God created the different kinds of animals including Man with perfect DNA still containing the many instructions to diversify into the many species of each kind we see today from living animals to the fossil record. This means that God built in enough fitness into the original DNA that most kinds of animals would be able to survive The Flood bottleneck but only as a once off. We don't expect that this experiment would be repeatable without having many more than two of each kind today.

We find that the drop off in lifespans adds weight to the argument that God did indeed cover the entire Earth with water in a global catastrophe. There are many more such evidences of this catastrophe and we would recommend browsing the resources at creation.com for a more thorough scientific perspective.

Since Noah only needed to take two of each kind of animal he would have had plenty of room on the Ark for himself and his family, all of the animals, and all of the food they would need for a year onboard the boat.