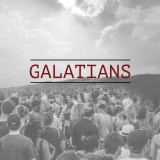 Gal. 5:19 Now the deeds of the flesh are evident, which are: immorality, impurity, sensuality,
Gal. 5:20 idolatry, sorcery, enmities, strife, jealousy, outbursts of anger, disputes, dissensions, factions,
Gal. 5:21 envying, drunkenness, carousing, and things like these, of which I forewarn you, just as I have forewarned you, that those who practice such things will not inherit the kingdom of God.
Gal. 5:22 But the fruit of the Spirit is love, joy, peace, patience, kindness, goodness, faithfulness,
Gal. 5:23 gentleness, self-control; against such things there is no law.
Gal. 5:24 Now those who belong to Christ Jesus have crucified the flesh with its passions and desires.
Gal. 5:25 If we live by the Spirit, let us also walk by the Spirit.
Gal. 5:26 Let us not become boastful, challenging one another, envying one another.

Gal. 6:1 Brethren, even if anyone is caught in any trespass, you who are spiritual, restore such a one in a spirit of gentleness; each one looking to yourself, so that you too will not be tempted.
Gal. 6:2 Bear one another’s burdens, and thereby fulfill the law of Christ.
Gal. 6:3 For if anyone thinks he is something when he is nothing, he deceives himself.
Gal. 6:4 But each one must examine his own work, and then he will have reason for boasting in regard to himself alone, and not in regard to another.
Gal. 6:5 For each one will bear his own load.

Gal. 6:6  The one who is taught the word is to share all good things with the one who teaches him.
Gal. 6:7  Do not be deceived, God is not mocked; for whatever a man sows, this he will also reap.
Gal. 6:8  For the one who sows to his own flesh will from the flesh reap corruption, but the one who sows to the Spirit will from the Spirit reap eternal life.
Gal. 6:9  Let us not lose heart in doing good, for in due time we will reap if we do not grow weary.
Gal. 6:10 So then, while we have opportunity, let us do good to all people, and especially to those who are of the household of the faith.

Gal. 6:11 See with what large letters I am writing to you with my own hand.
Gal. 6:12 Those who desire to make a good showing in the flesh try to compel you to be circumcised, simply so that they will not be persecuted for the cross of Christ.
Gal. 6:13 For those who are circumcised do not even keep the Law themselves, but they desire to have you circumcised so that they may boast in your flesh.
Gal. 6:14 But may it never be that I would boast, except in the cross of our Lord Jesus Christ, through which the world has been crucified to me, and I to the world.
Gal. 6:15 For neither is circumcision anything, nor uncircumcision, but a new creation.
Gal. 6:16 And those who will walk by this rule, peace and mercy be upon them, and upon the Israel of God.
Gal. 6:17 From now on let no one cause trouble for me, for I bear on my body the brand-marks of Jesus.
Gal. 6:18 The grace of our Lord Jesus Christ be with your spirit, brethren. Amen.