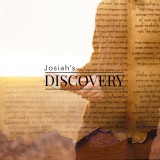 2Chr. 34:1 Josiah was eight years old when he became king, and he reigned thirty-one years in Jerusalem.
2Chr. 34:2 He did right in the sight of the Lord, and walked in the ways of his father David and did not turn aside to the right or to the left.
2Chr. 34:3 For in the eighth year of his reign while he was still a youth, he began to seek the God of his father David; and in the twelfth year he began to purge Judah and Jerusalem of the high places, the Asherim, the carved images and the molten images.
2Chr. 34:4 They tore down the altars of the Baals in his presence, and the incense altars that were high above them he chopped down; also the Asherim, the carved images and the molten images he broke in pieces and ground to powder and scattered it on the graves of those who had sacrificed to them.
2Chr. 34:5 Then he burned the bones of the priests on their altars and purged Judah and Jerusalem.
2Chr. 34:6 In the cities of Manasseh, Ephraim, Simeon, even as far as Naphtali, in their surrounding ruins,
2Chr. 34:7 he also tore down the altars and beat the Asherim and the carved images into powder, and chopped down all the incense altars throughout the land of Israel. Then he returned to Jerusalem.

2Chr. 34:8  Now in the eighteenth year of his reign, when he had purged the land and the house, he sent Shaphan the son of Azaliah, and Maaseiah an official of the city, and Joah the son of Joahaz the recorder, to repair the house of the Lord his God.
2Chr. 34:9 They came to Hilkiah the high priest and delivered the money that was brought into the house of God, which the Levites, the doorkeepers, had collected from Manasseh and Ephraim, and from all the remnant of Israel, and from all Judah and Benjamin and the inhabitants of Jerusalem.
2Chr. 34:10 Then they gave it into the hands of the workmen who had the oversight of the house of the Lord, and the workmen who were working in the house of the Lord used it to restore and repair the house.
2Chr. 34:11 They in turn gave it to the carpenters and to the builders to buy quarried stone and timber for couplings and to make beams for the houses which the kings of Judah had let go to ruin.
2Chr. 34:12 The men did the work faithfully with foremen over them to supervise: Jahath and Obadiah, the Levites of the sons of Merari, Zechariah and Meshullam of the sons of the Kohathites, and the Levites, all who were skillful with musical instruments.
2Chr. 34:13 They were also over the burden bearers, and supervised all the workmen from job to job; and some of the Levites were scribes and officials and gatekeepers.

2Chr. 34:14  When they were bringing out the money which had been brought into the house of the Lord, Hilkiah the priest found the book of the law of the Lord given by Moses.
2Chr. 34:15 Hilkiah responded and said to Shaphan the scribe, “I have found the book of the law in the house of the Lord.” And Hilkiah gave the book to Shaphan.
2Chr. 34:16 Then Shaphan brought the book to the king and reported further word to the king, saying, “Everything that was entrusted to your servants they are doing.
2Chr. 34:17 “They have also emptied out the money which was found in the house of the Lord, and have delivered it into the hands of the supervisors and the workmen.”
2Chr. 34:18 Moreover, Shaphan the scribe told the king saying, “Hilkiah the priest gave me a book.” And Shaphan read from it in the presence of the king.
2Chr. 34:19  When the king heard the words of the law, he tore his clothes.