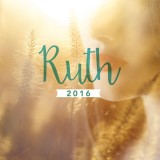 Ruth 1:1  Now it came about in the days when the judges governed, that there was a famine in the land. And a certain man of Bethlehem in Judah went to sojourn in the land of Moab with his wife and his two sons.
Ruth 1:2 The name of the man was Elimelech, and the name of his wife, Naomi; and the names of his two sons were Mahlon and Chilion, Ephrathites of Bethlehem in Judah. Now they entered the land of Moab and remained there.
Ruth 1:3 Then Elimelech, Naomi’s husband, died; and she was left with her two sons.
Ruth 1:4 They took for themselves Moabite women as wives; the name of the one was Orpah and the name of the other Ruth. And they lived there about ten years.
Ruth 1:5 Then both Mahlon and Chilion also died, and the woman was bereft of her two children and her husband.

Luke 16:15 And He said to them, “You are those who justify yourselves in the sight of men, but God knows your hearts; for that which is highly esteemed among men is detestable in the sight of God.

Deut. 11:13 “It shall come about, if you listen obediently to my commandments which I am commanding you today, to love the Lord your God and to serve Him with all your heart and all your soul,
Deut. 11:14 that He will give the rain for your land in its season, the early and late rain, that you may gather in your grain and your new wine and your oil.
Deut. 11:15 “He will give grass in your fields for your cattle, and you will eat and be satisfied.
Deut. 11:16 “Beware that your hearts are not deceived, and that you do not turn away and serve other gods and worship them.
Deut. 11:17 “Or the anger of the Lord will be kindled against you, and He will shut up the heavens so that there will be no rain and the ground will not yield its fruit; and you will perish quickly from the good land which the Lord is giving you.

Judg. 2:11 Then the sons of Israel did evil in the sight of the Lord and served the Baals,
Judg. 2:12 and they forsook the Lord, the God of their fathers, who had brought them out of the land of Egypt, and followed other gods from among the gods of the peoples who were around them, and bowed themselves down to them; thus they provoked the Lord to anger.
Judg. 2:13 So they forsook the Lord and served Baal and the Ashtaroth.
Judg. 2:14 The anger of the Lord burned against Israel, and He gave them into the hands of plunderers who plundered them; and He sold them into the hands of their enemies around them, so that they could no longer stand before their enemies.
Judg. 2:15 Wherever they went, the hand of the Lord was against them for evil, as the Lord had spoken and as the Lord had sworn to them, so that they were severely distressed.

Deut. 23:3 “No Ammonite or Moabite shall enter the assembly of the Lord; none of their descendants, even to the tenth generation, shall ever enter the assembly of the Lord,
Deut. 23:4 because they did not meet you with food and water on the way when you came out of Egypt, and because they hired against you Balaam the son of Beor from Pethor of Mesopotamia, to curse you.
Deut. 23:5 “Nevertheless, the Lord your God was not willing to listen to Balaam, but the Lord your God turned the curse into a blessing for you because the Lord your God loves you.
Deut. 23:6 “You shall never seek their peace or their prosperity all your days.

Deut. 7:1  “When the Lord your God brings you into the land where you are entering to possess it, and clears away many nations before you, the Hittites and the Girgashites and the Amorites and the Canaanites and the Perizzites and the Hivites and the Jebusites, seven nations greater and stronger than you,
Deut. 7:2 and when the Lord your God delivers them before you and you defeat them, then you shall utterly destroy them. You shall make no covenant with them and show no favor to them.
Deut. 7:3 “Furthermore, you shall not intermarry with them; you shall not give your daughters to their sons, nor shall you take their daughters for your sons.
Deut. 7:4 “For they will turn your sons away from following Me to serve other gods; then the anger of the Lord will be kindled against you and He will quickly destroy you.

Deut. 7:6 “For you are a holy people to the Lord your God; the Lord your God has chosen you to be a people for His own possession out of all the peoples who are on the face of the earth.
Deut. 7:7  “The Lord did not set His love on you nor choose you because you were more in number than any of the peoples, for you were the fewest of all peoples,
Deut. 7:8 but because the Lord loved you and kept the oath which He swore to your forefathers, the Lord brought you out by a mighty hand and redeemed you from the house of slavery, from the hand of Pharaoh king of Egypt.

Eph. 2:11 Therefore remember that formerly you, the Gentiles in the flesh, who are called “Uncircumcision” by the so-called “Circumcision,” which is performed in the flesh by human hands —
Eph. 2:12 remember that you were at that time separate from Christ, excluded from the commonwealth of Israel, and strangers to the covenants of promise, having no hope and without God in the world.
Eph. 2:13 But now in Christ Jesus you who formerly were far off have been brought near by the blood of Christ.