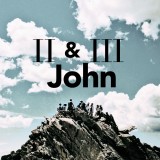 2John 1  The elder to the  chosen lady and her children, whom I love in truth; and not only I, but also all who know the truth,
2John 2  for the sake of the truth which abides in us and will be with us forever:

2John 13  The children of your  chosen sister greet you.

Matt. 12:47 Someone said to Him, “Behold, Your mother and Your brothers are standing outside seeking to speak to You.”
Matt. 12:48 But Jesus answered the one who was telling Him and said, “Who is My mother and who are My brothers?”
Matt. 12:49 And stretching out His hand toward His disciples, He said, “Behold My mother and My brothers!
Matt. 12:50 “For whoever does the will of My Father who is in heaven, he is My brother and sister and mother.”

Mark 10:29 Jesus said, “Truly I say to you,  there is no one who has left house or brothers or sisters or mother or father or children or farms, for My sake and for the gospel’s sake,
Mark 10:30  but that he will receive a hundred times as much now in  the present age, houses and brothers and sisters and mothers and children and farms, along with persecutions; and in  the age to come, eternal life.

2John 3  Grace, mercy and peace will be with us, from God the Father and from Jesus Christ, the Son of the Father, in truth and love.

2John 4   I was very glad to find some of your children walking in truth, just as we have received commandment to do from the Father.

2John 7  For many deceivers have gone out into the world, those who do not acknowledge Jesus Christ as coming in the flesh. This is the deceiver and the antichrist.

1John 4:3 and every spirit that does not confess Jesus is not from God; this is the spirit of the antichrist, of which you have heard that it is coming, and  now it is already in the world.

2John 8  Watch yourselves, that you do not lose what we have accomplished, but that you may receive a full reward.
2John 9  Anyone who goes too far and does not abide in the teaching of Christ, does not have God; the one who abides in the teaching, he has both the Father and the Son.

2John 10 If anyone comes to you and does not bring this teaching,  do not receive him into your house, and do not give him a greeting;
2John 11 for the one who gives him a greeting  participates in his evil deeds.

2John 12  Though I have many things to write to you, I do not want to do so with paper and ink; but I hope to come to you and speak face to face, so that  your  joy may be made full.
2John 13  The children of your  chosen sister greet you.