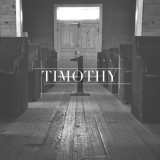 1Tim. 4:8 for bodily discipline is only of little profit, but godliness is profitable for all things, since it holds promise for the present life and also for the life to come.
1Tim. 4:9 It is a trustworthy statement deserving full acceptance.

1Tim. 4:10 For it is for this we labor and strive, because we have fixed our hope on the living God, who is the Savior of all men, especially of believers.
1Tim. 4:11 Prescribe and teach these things.

James 1:2 Consider it all joy, my brethren, when you encounter various trials,
James 1:3 knowing that the testing of your faith produces endurance.
James 1:4 And let endurance have its perfect result, so that you may be perfect and complete, lacking in nothing.

1Tim. 4:12 Let no one look down on your youthfulness, but rather in speech, conduct, love, faith and purity, show yourself an example of those who believe.
1Tim. 4:13 Until I come, give attention to the public reading of Scripture, to exhortation and teaching.
1Tim. 4:14 Do not neglect the spiritual gift within you, which was bestowed on you through prophetic utterance with the laying on of hands by the presbytery.
1Tim. 4:15 Take pains with these things; be absorbed in them, so that your progress will be evident to all.
1Tim. 4:16 Pay close attention to yourself and to your teaching; persevere in these things, for as you do this you will ensure salvation both for yourself and for those who hear you.

2Cor. 10:10 For they say, “His letters are weighty and strong, but his personal presence is unimpressive and his speech contemptible.”
2Cor. 10:11 Let such a person consider this, that what we are in word by letters when absent, such persons we are also in deed when present.
2Cor. 10:12  For we are not bold to class or compare ourselves with some of those who commend themselves; but when they measure themselves by themselves and compare themselves with themselves, they are without understanding.
2Cor. 10:13 But we will not boast beyond our measure, but within the measure of the sphere which God apportioned to us as a measure, to reach even as far as you.

1Tim. 5:1 Do not sharply rebuke an older man, but rather appeal to him as a father, to the younger men as brothers,
1Tim. 5:2 the older women as mothers, and the younger women as sisters, in all purity.

1Tim. 5:4 but if any widow has children or grandchildren, they must first learn to practice piety in regard to their own family and to make some return to their parents; for this is acceptable in the sight of God.
1Tim. 5:5 Now she who is a widow indeed and who has been left alone, has fixed her hope on God and continues in entreaties and prayers night and day.
1Tim. 5:6 But she who gives herself to wanton pleasure is dead even while she lives.
1Tim. 5:7 Prescribe these things as well, so that they may be above reproach.

1Tim. 5:7 Prescribe these things as well, so that they may be above reproach.